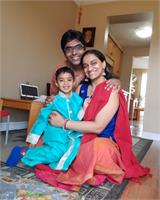 Shwetha has been practicing yoga for more than 25 years and teaching yoga for 5 years. She is a guest faculty in The Branches 250-hour YTT sharing sanskrit and Yogic philosophy. Yoga has given her immense strength and helped her rediscover herself. Since Shwetha comes from the birthplace of Yoga, India, she has been fortunate to study the ancient texts of yoga to understand the roots of yoga. She practices and teaches vinyasa flow yoga that emphasizes the elements of nature. For her, Yoga is a bridge that connects her soul towards the purpose of life. It teaches her to enjoy the physical movement of the body while experiencing a stillness in the mind.Shwetha and her husband Manu have been married for more than 10 years and have a son, Shiva (named after Lord Shiva who is the first Yogi). Both of them were immersed into a culture of shlokas and mantras from childhood. They formally studied Sanskrit from high school. Their specific interest in Sanskrit are in subhashitas (proverbs), hymns and the ancient texts of science.